I have to confess that, when I got Vilma’s first call, I got amazed. I think I never perceived such an antusiasm, curiosity and yearning to get started with wedding plans. Living between Miami and New York, Vilma has mexican and cuban roots, while Aryan’s father has middle eastern origins. They had already planned a trip to Italy with Vilma’s family to secure a venue and work on the various preparations for their wedding in Tuscan Villa that should happen in one year. That was the only trip they could organize. So we planned a busy week with site inspections, tastings, hairstyle and makeup trials, meeting with florist and so on.

Their perfect place was an historical villa not too far from Florence. Sorrounded by vineyards ad olive trees, with plenty of frescos and art pieces, bride and groom had no doubt that that was the one. However they didn’t want to spoil the ambience and the sorroundings of the wedding. So the most of guest stayied in Florence, where we organized a welcome aperitif at an informal restaurant located in a courtyard of the city centre.

The wedding day itself ran smoothly, with everybody enjoying the light of the sunset during the cermony. Although it was a symbolic celebration it has been enriched by the traditional mexican ritual el lasso: a large rosary placed around the couple as a symbol of unity.

MOOD BOARD AND STYLE

Vilma and Aryan’s wedding is definitely unusual, at least from the perspective of the style. I have to say that we were definitely excited to work on a concept that was entirely different from any other we did before. The bride’s vision was clear: dark colours, twilight atmosphere, gloomy touches… a contemporary, gothic fairytale. When designing each moment of the day, we removed the melancholic element of the initial brief, to leave space to a sort of elegant, dreamy decadence.

Each decoration was defined and characterized by details. Flowers and greenery were attentively selected not only for their colours or shapes, but for the suggestion they inspired. Callas and roses for the elegance; the pendulous greenery for its sinuosity climbing on candelabras and slithering on the table; artichokes to add a bitter, stinging hint. Black tassels decorated the candelabras waving in the breeze. Back candles and a thousand of tea lights sprinkled along the 115 feet imperial table.

The ceremony took place in the courtyard of the villa, where we used the architecture of the stairs that lead to the main entrance as backdrop and natural arch to frame the couple. The stair’s stone banister was completely decorated with greenery and flowers projected downwards, with bushes of ferns and flowers along the aisles.

For the after dinner, we decided to add a boudoir, middle eastern inspiration with hookahs, arabesque lanterns and carpets, velvet sofas and chaise longues. 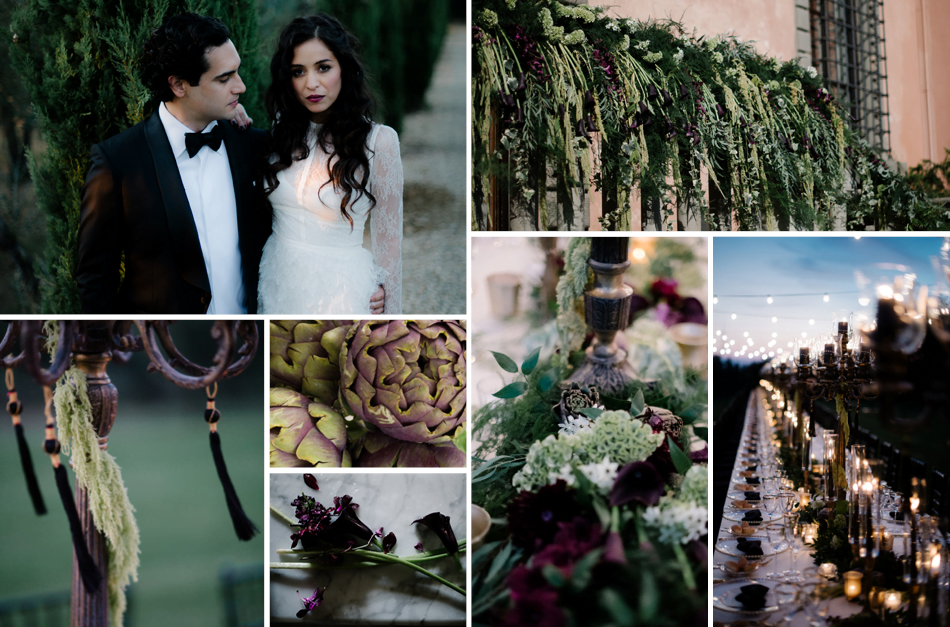 Everything was truly perfect, you'll be with us forever!

I am so happy we choose Sara and her team for our wedding. I know I wasn’t any bride, I had an unsual vision, but when I talk to Sara, she immediately understood what I wanted, we immediately had a good vibe. We worked together to create my wedding from scratch, and everything was exactly how I wanted. We enyoied a week around Tuscany with her and we had so much fun. On the day and during the month leading to it, she and all all vendors made us feeling like our wedding was unique and special. We cannot thank you enough, Sara. You’ll be with us forever, we love you!

Prev< Previous Wedding
Next Wedding >Next
We use cookies on our website to give you the most relevant experience by remembering your preferences and repeat visits. By clicking “Accept All”, you consent to the use of ALL the cookies. However, you may visit "Cookie Settings" to provide a controlled consent.
Cookie SettingsCloseAccept All
Manage consent

This website uses cookies to improve your experience while you navigate through the website. Out of these, the cookies that are categorized as necessary are stored on your browser as they are essential for the working of basic functionalities of the website. We also use third-party cookies that help us analyze and understand how you use this website. These cookies will be stored in your browser only with your consent. You also have the option to opt-out of these cookies. But opting out of some of these cookies may affect your browsing experience.
Necessary Always Enabled
Necessary cookies are absolutely essential for the website to function properly. These cookies ensure basic functionalities and security features of the website, anonymously.
Functional
Functional cookies help to perform certain functionalities like sharing the content of the website on social media platforms, collect feedbacks, and other third-party features.
Performance
Performance cookies are used to understand and analyze the key performance indexes of the website which helps in delivering a better user experience for the visitors.
Analytics
Analytical cookies are used to understand how visitors interact with the website. These cookies help provide information on metrics the number of visitors, bounce rate, traffic source, etc.
Advertisement
Advertisement cookies are used to provide visitors with relevant ads and marketing campaigns. These cookies track visitors across websites and collect information to provide customized ads.
Others
Other uncategorized cookies are those that are being analyzed and have not been classified into a category as yet.
SAVE & ACCEPT
Powered by

This information is precious in helping us to better understand your needs and to provide you with a personalized reply and guidance. We will be in touch within 24 hours.

Need a quote or suggestions?

Please provide us with some essential info about your dream wedding by clicking below and filling the form.